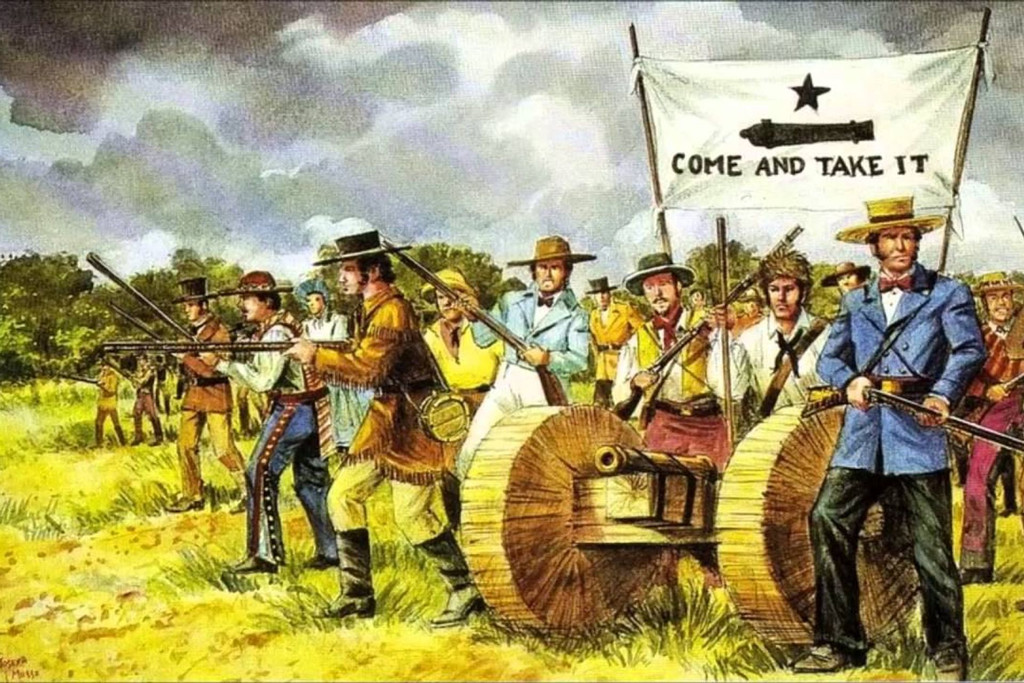 Come and Take It TEE

"Come and take it" is a historic slogan, first used in 480 BC in the Battle of Thermopylae as "Molon labe" by Spartan King Leonidas I as a defiant answer and last stand to the surrender demanded by the Persian Army, and later in 1778 at Fort Morris in the Province of Georgia during the American revolution, and in 1835 at the Battle of Gonzales during the Texas Revolution.

In early January 1831, Green DeWitt wrote to Ramón Músquiz, the top political official of Bexar, and requested armament for defense of the colony of Gonzales. This request was granted by delivery of a small used cannon. The small bronze cannon was received by the colony and signed for on March 10, 1831, by James Tumlinson, Jr. The swivel cannon was mounted to a blockhouse in Gonzales and later was the object of Texas pride. At the minor skirmish known as the Battle of Gonzales—the first land battle of the Texas Revolution against Mexico—a small group of Texans successfully resisted the Mexican forces who had orders from Colonel Domingo de Ugartechea to seize their cannon. As a symbol of defiance, the Texans had fashioned a flag containing the phrase "come and take it" along with a black star and an image of the cannon that they had received four years earlier from Mexican officials. This was the same message that was sent to the Mexican government when they told the Texans to return the cannon; lack of compliance with the initial demands led to the failed attempt by the Mexican military to forcefully take back the cannon.