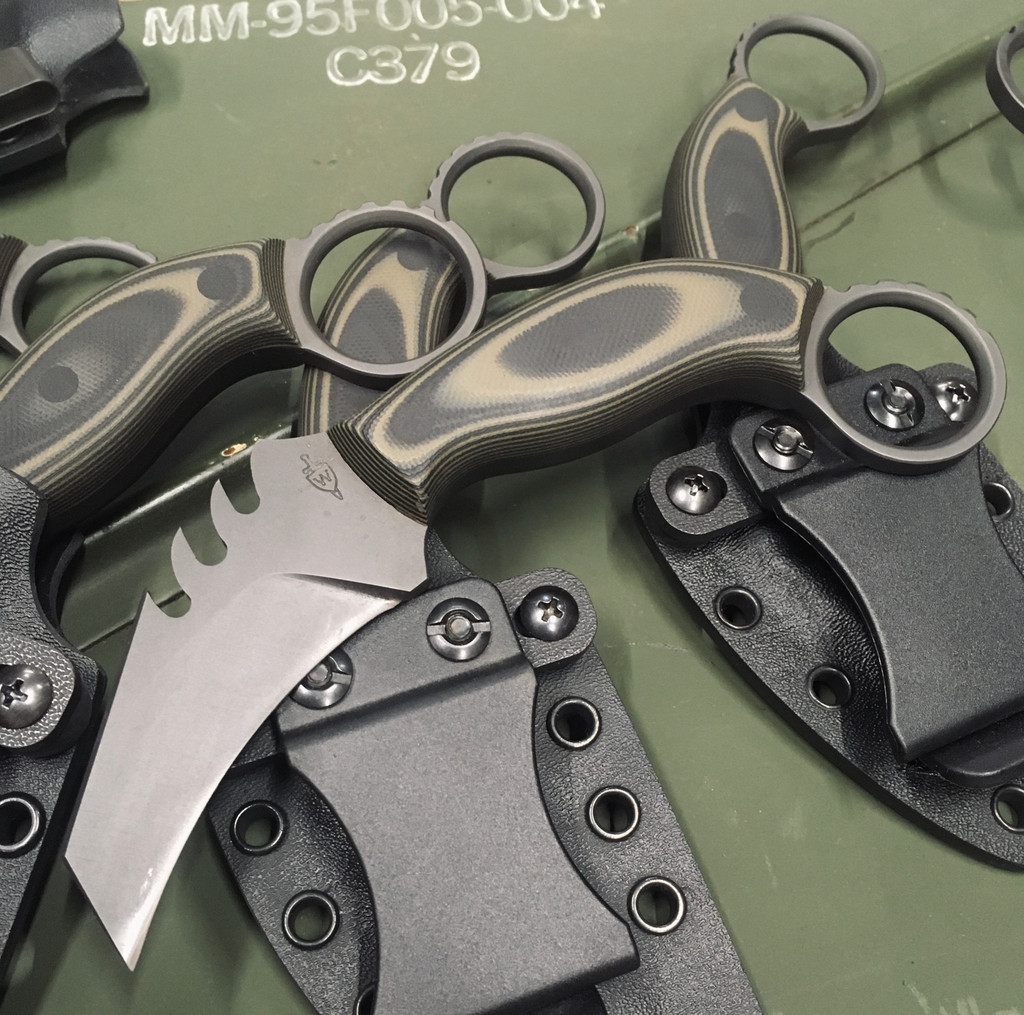 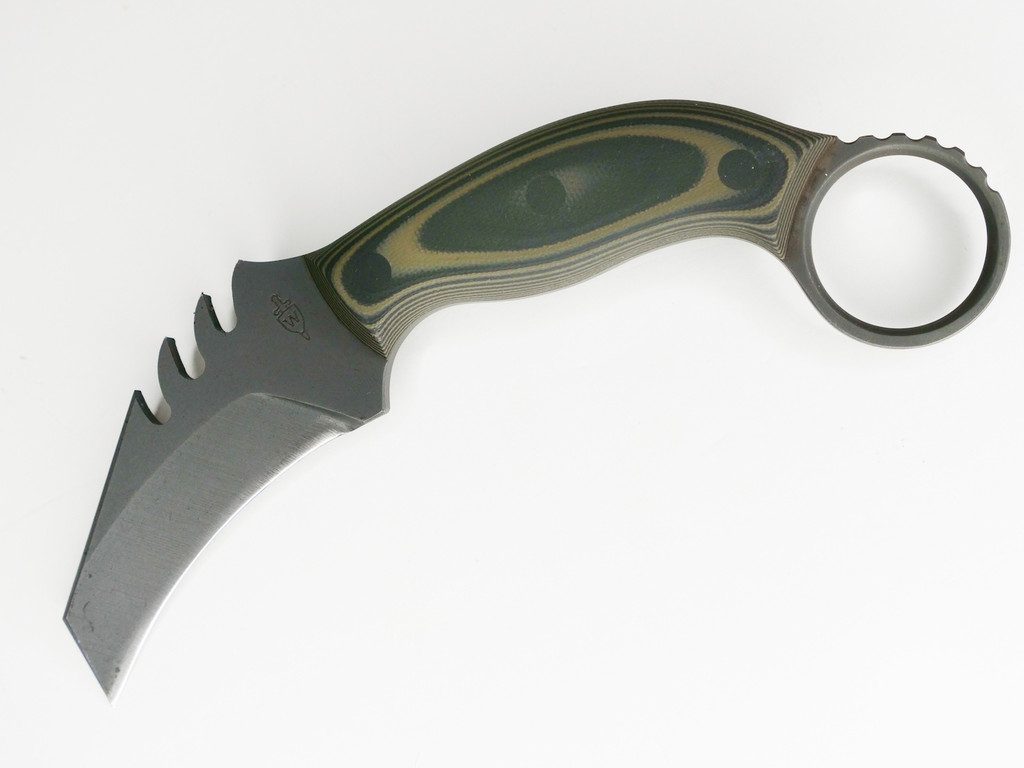 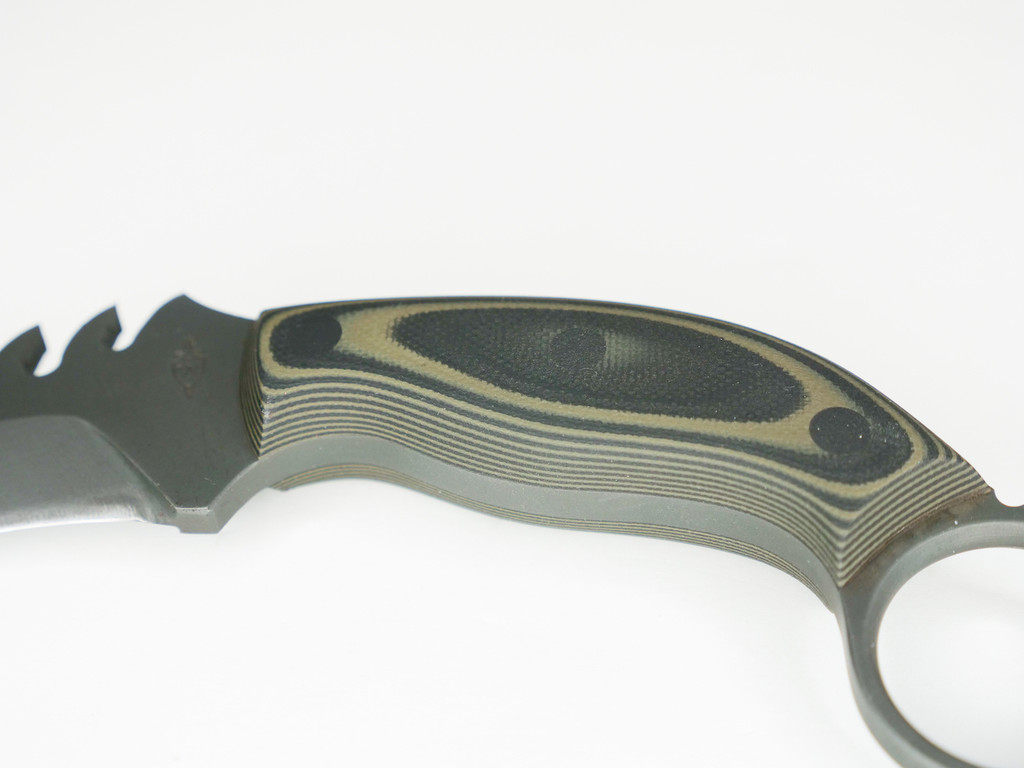 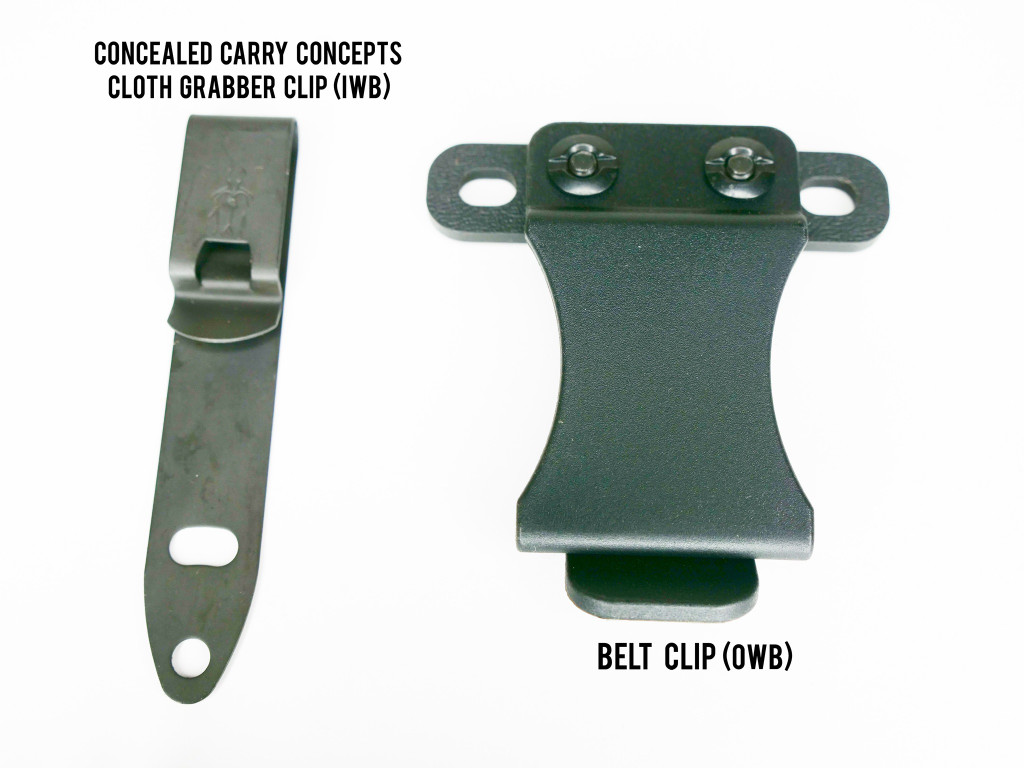 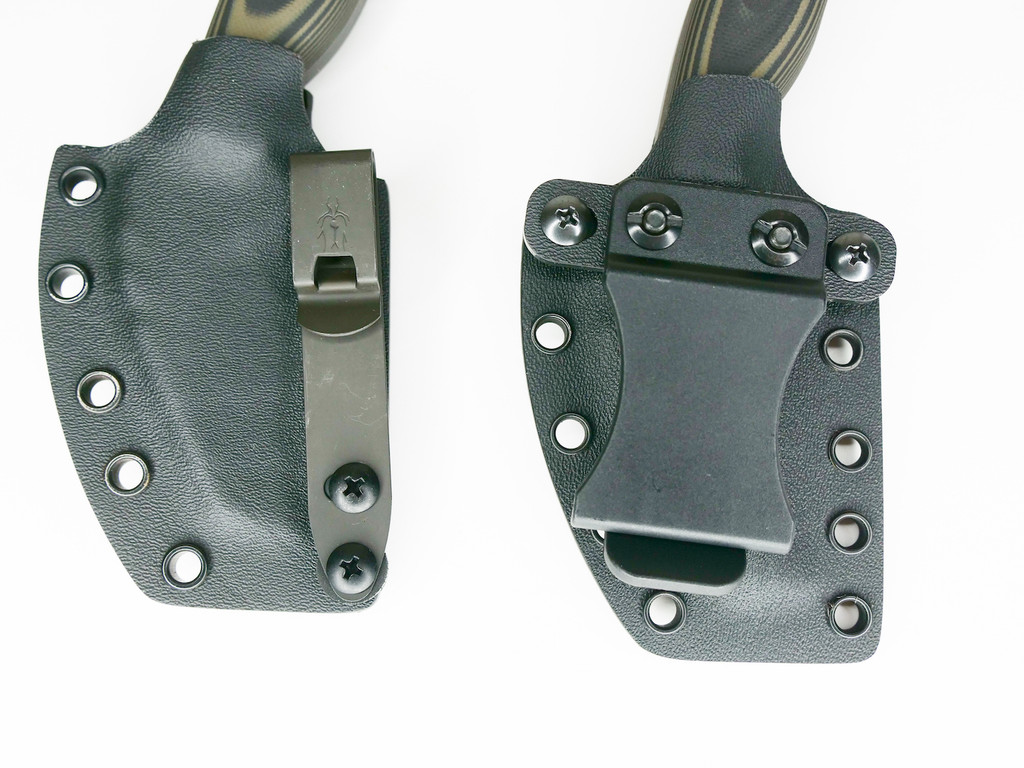 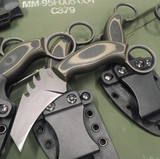 The karambit is believed to have originated among the Minangkabau people of West Sumatra where, according to folklore, it was inspired by the claws of tiger. It was typically used as a secondary or last resort when the fighter's other weapons were lost in battle.

We took some characteristics of ancient karambits and modernized them. Our goal was to make the T.U.S.K. an easily concealable and daily carry knife. Drawing from ancient photographs and text we added the archaic characteristic known as "cock-tail feathers". The three harpoon like barbs at the rear of the karambit are designed to catch/trap clothing (a technique used in filipino martial arts) it also will rip and tear- maximizing damage in a self-defense situation.

The blade shape as a minimal curve with a modified tanto tip intended for thrusting and to provide maximum tip strength. An expertly designed contour of the handle places the blade in a precise position for tip down or "earth grip". One of the most notable properties of a karambit is the ring. The T.U.S.K has a slightly oversized ring to work with gloves for military professionals but will work just as well without. To increase control the ring has jimping to increase grip when in the extended position.

The best for your duty belt

The best for your duty belt

Jack said in one of his videos this was the best karambit on the market. I did my research and was eventually forced to agree. When this production batch was released, I wasn't expecting the price increase, but after researching the upgraded steel, decided it was worth it. I was carrying the Cold Steel Safe Maker I on my left hip attached to my underbelt of my duty belt for many years. I became concerned about the poor ergonomics of drawing the Safe Maker I (forearm and wrist straight up and down). This is much more of a ergonomic draw, both for left hand, and reaching across with my right hand. It comes set up for a left hand belt mount, but you can swap the hardware for right hand belt mount. The opening in the sheath for the belt is 1-5/8" x 5/8". My scale says the knife and sheath together weigh 7 ounces. I have the sheath attached to my underbelt, riding on my left hip bone, and pressed in by the Taser and radio on my duty belt. There is no discomfort from the sheath through the entire shift. During numerous rapid exits from my patrol vehicle, I've had the seatbelt hang up on the radio antenna and the grip of the TUSK. The tug of the seatbelt has not removed the TUSK from its sheath. I wear glove size Large, and it fits my hand perfectly, both in the grip down, and conventional holding position. There is just enough room to squeeze your fingers in if you are glove size XL. The ergonomics are perfect in all three grip positions, meaning you can't tell that the knife was designed for one grip position over the others. Surprisingly, if I reach across with my right hand, loop my index finger through the ring, with my thumb on the jimping and ring finger under the ring, you can pull the TUSK out while simultaneously slashing and the TUSK feels just as locked in the hand as if you had a full grip. Every part of the grip is smooth with no rough, sharp, or uneven areas. The Wenger mark on the left side of the blade is nice and crisp. The Black Scout mark on the right side of the blade is barely visible (insufficient pressure applied?). The blade is very sharp, easily slicing paper. This is a great upgrade from the Safe Maker I, in ergonomics of drawing with both hands, security of the grip, and ability to both stab AND slash. Just to clarify, the Safe Maker I is still a great knife, but this is much better, and despite the sticker shock, it was worth the investment.